A favorite game of numerical strategy, Sudoku, is now available for Blind and low vision players with this wooden playing board with Braille number tiles, and a Braille book with 100 Sudoku puzzle and solutions.

This set consists of a 9 inches x 9 inches wooden board that is divided into 9 individual indented squares that measure 3 inches by 3 inches each. The board is made of quality wood and its frame is approximately 10 inches square and it is 1/2 inch thick. Each Braille number peg is marked with a raised line at the top and an indent at the bottom to help you quickly orient it and insert it into the board so all of the Braille numbers can be read tactiley straight up and down. The board has peg holes for all eighty-one numbers, divided up into the required nine 3X3 separate squares. Also included is a drawstring bag containing oodles of Braille numbers with a peg at the bottom. Use these pegs to set up a new Sudoku puzzle, or fill in numbers as you work on it, all you do is insert the appropriate Braille number into the desired hole in your wooden playing grid. The entire game, pegs and board, weighs just under 2 pounds. Last, but not least, the Braille Book of 100 Sudoku puzzles and solutions.

Sudoku puzzles were first introduced in 1986 and was then popularized by a Japanese company in 2005. The grid style game has some numbers filled in and other squares left blank. The goal is to solve it in such a way that each column and each row contains the digits 1 through 9 only once. In addition, there can be no duplicate numbers in each of the nine individual 3X3 squares. It us usually a pencil to paper type game, but that wasn't user friendly for Blind players.

As the Manufacturer says,
"Accomplishing the task of doing a Sudoku puzzle in Braille has been challenging to say the least, because there's never been an easy way for blind players to write in a number on their puzzle, then erase it and move it somewhere else when needed. But now, at long last, that puzzle is solved! Discover the world's first portable, fully accessible Sudoku puzzle set for Blind players! It's a straight forward concept, yet a revolutionary one at the same time. The number pegs fit snuggly into the holes in the board, but aren't difficult to pull out to move somewhere else.

Okay, you're thinking, that all sounds pretty good. But how do you tell the difference between a number that was presented in the original puzzle you've copied onto the board, and a number you've filled in yourself? Aha, we've solved that one, too! The braille number pegs are specially designed to hold two positions. As you're setting up a puzzle from the book, firmly press each number into the board. Then, as you try numbers, just place them lightly into the appropriate hole. These numbers stand up a little higher than the other numbers presented in the original puzzle, and also make these pegs feel a little looser to the touch, to help you remember those could just be temporary numbers. When finished, simply press the correct number pegs down to lock them in place."

This is an ingenious portable Braille game that can be played again and again. Sudoku is a delightful strategy game and really challenges the mind. 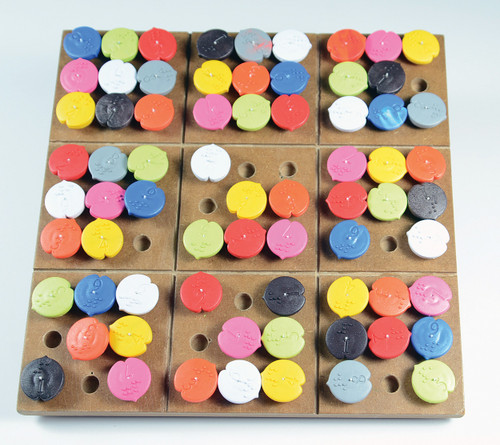