The Vision Buddy television viewing system allows a low vision user to see television programs more clearly and easily, using a virtual reality headset.  This brings the television viewing directly in front of the user and may allow them to see the entire frame of their television program.  Using simple plug and play connectivity, Vision Buddy connects to nearly any television, satellite, or streaming player and then streams the HD quality video directly into the headset using real time image correction.  The video image can also be zoomed in or out for optimal viewing.  Sound from the TV can either be heard through speakers in the headset or via headphones which can plug into the headset.

Vision Buddy also comes with OCR and digital magnifier modes.  Using advanced OCR (optical character recognition,) Vision Buddy can take a snapshot of printed material and read aloud that scanned text, making print more accessible.  The digital magnifier allows the user to view and magnify, in real time, people and objects around them, providing more clarity to things such as a friend’s face, a photograph, a TV schedule, or a letter from a friend. 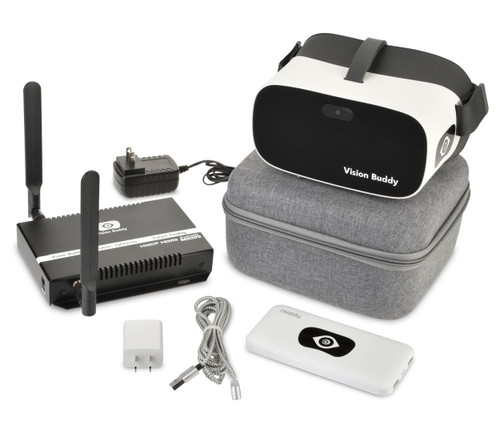